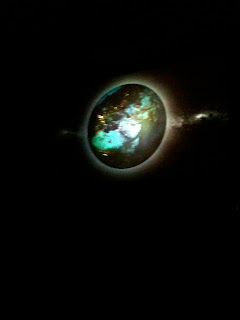 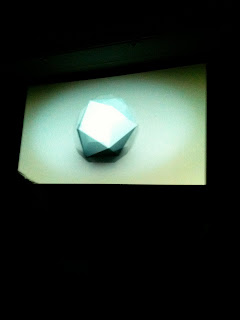 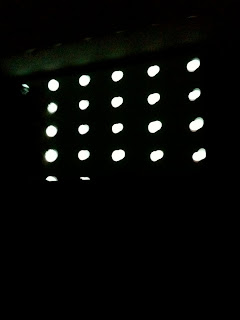 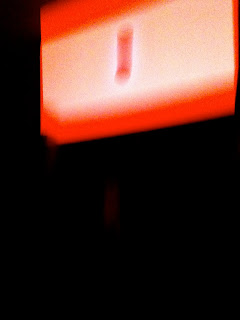 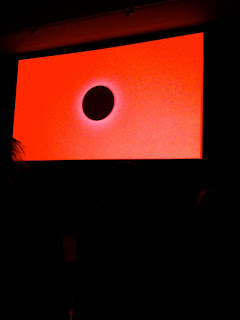 It seemed somehow "correct" that only a few days before 'Low Horizons " opens that an event such as "Music for Real Airports" should happen nearby! I was really excited to discover that in a response to Brian Eno's classic "Music for Airports" Sheffield's legendary electronic mysterions THE BLACK DOG and electronic artist HUMANSTUDIO combined to create this contemporary audio visual experience for 'SENSORIA' Sheffield's music/film/digital festival.
Arriving at the Millenium Gallery I hooked up with Gerrard and Sean and for 45 minutes the gathering crowd were treated to an eclectic dj set from Richard H Kirk .
As his set drew to a close a side door opened and we filtered into a darkened room.
A large screen dominated one wall and behind us shadowy forms behind a row of tables were illuminated only by the screen glow of numerous mac books.
Without any further ado the music began slowly pulsating . The screen flickered into life and we began our 50 minute journey. Black Dog electronic soundscapes hummed,bleeped crashed in unison with the screen based artwork . Fantastic. The electronic compositions here are miles away from Eno's airport but then they should be as we are now in 2010. The visualisations were inventive and not at all predictable . Having seen the birth of this kind of experience with Pink Floyd's oil wheels of the '60's into the huge extravaganza that was "Dark Side of the Moon" and onwards through the dance,trance and rave culture here are the new breed pushing back the boundaries again.
So it is-"the gift of sound and vision".." Kurtagonals ", Bowie and Eno were the inspiration for most of my "Low Horizons" paintings -as August Macke said " colors contain counterpoint, treble and bass clef , major and minor, just like music".
He was right and "Music for Real Airports"was another example of creativity using the tools of today to make art.
We slowly left the room making our way into the harsh reality of the Gallery spotlights quietly satisfied. On the journey home "Boards of Canada" quietly accompanied thoughts of my own airport visit and Finland.
Posted by keef at 08:03 No comments: 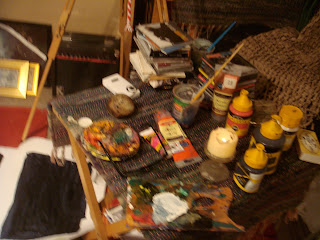 I love Iceland so I am forgiving the awesome volcano for jeopardising not only my flight to Finland but the arrival of all my paintings!!! The good news is that quite a few have already arrived .Im still feeling just a little unsettled because everything is "up in the air"..ahh did you see what I did there......
Jussi over in Pori is confident that all will be well but its my nature to be pessimistic.
I spent most of Sunday tidying up my art space (by that I mean the garage) while listening to "introspection " by THE END , "MOONAGE TIMEQUAKE" (50'S America in fear of Alien Interference), "TOMORROW featuring KeithWest" and some early Dylan.
Just left with a strange empty feeling as I look around and see that all those paintings are gone!
Odd
Posted by keef at 07:14 No comments: 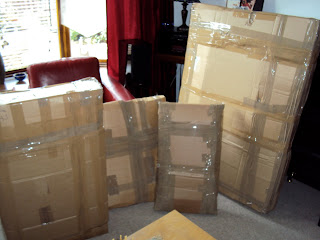 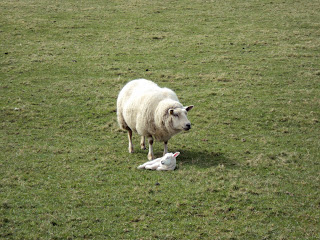 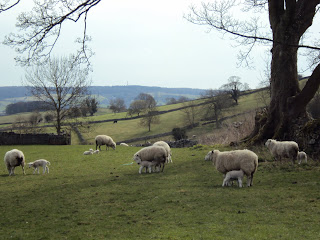 Gosh ! Spring is officially here. I only know because there are lambs skipping about in the pastures just near the house! They do seem happy.I guess they are not aware of the future. A pair of blackbirds are building a nest in our laurel bush. Roxanne seems determined to scare them off. She's a lovely cat and useless at catching stuff so they are safe.
Pori is now two weeks away today and I am feeling excited and a little nervous. The strangest feeling was parceling up all the work ready for transportation .18 months work encased in bubble wrap and cardboard ready for D.H.L. to collect. My babies in transit !I am now putting the final touches to my "book of inspiration" for the gallery. This contains photos, artwork, quotations and lists of music , books and films that I have found helpful during the time I have been painting. This task is really a lot of fun and slightly indulgent , in fact, like a school project -I'm hoping for an A star!!
With all the work for Finland completed I have also spent some time clearing up my mess in the "studio" (posh term for ex-garage) and wondering what is next up?
Been for a great walk today at the Monyash end of Lathkill Dale. There is a pond full of tadpoles and newts. I was filled with nostalgia for the days when, with my friends , we could wander the fields and hills around Castleton and gather frogspawn for home and classroom. In the late 1950's you could do stuff like that. We were always amazed as those little black dots became tadpoles and then frogs. It was a great day when we let them out into the fields to make their way in life.
My favourites were newts. Mini dragons that were amphibious. I still find them fascinating today!
Posted by keef at 13:00 No comments:

Labels: its getting near 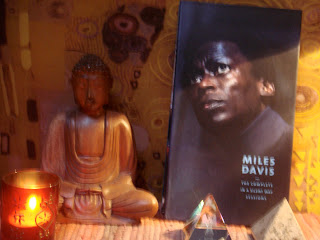 Easter has been important in my life for many years . I still remember when shops closed on Good Friday and everything came to a standstill-wonderful . Most folks these days seem to have lost sight of why we have an Easter Holiday and even if you have no religious feelings its a good thing to take some quiet time to reflect on life the universe and everything .
Having to work Good Friday I was wondering, as the "Son of God" was murdered, I why this day is celebrated as a good day. Jesus seems to have a wonderful life affirming message but as usual anything that offers freedom and hope for people seems to be squashed by "THEM".
Anyway I slipped some Gospel music on the shop P/A ( Blind Boys of Alabama) , and some Bob Dylan...always good for the soul and carried on with my musings.
Whatever you are up to this Easter take some time to re-engage with joy, peace, beauty and wonder...its important...trust me.
Have a happy Easter...
Posted by keef at 10:37 No comments: